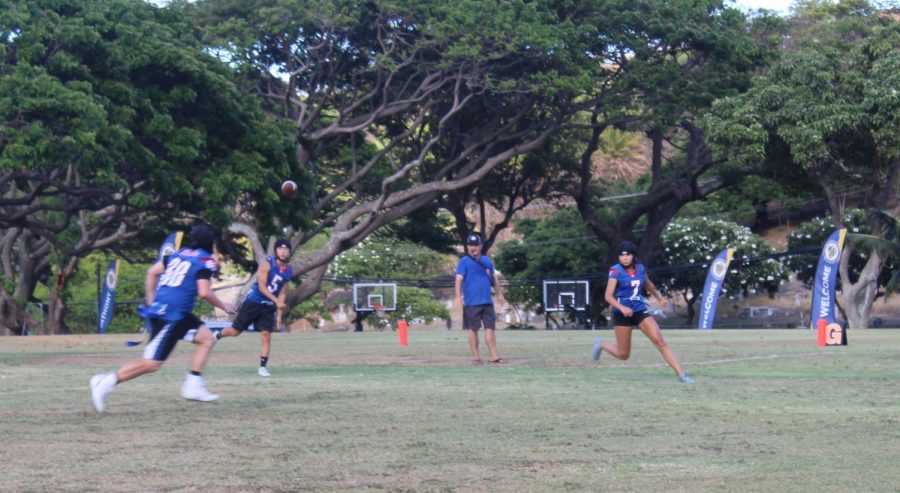 The Seabury Hall Spartans defeated the St. Anthony Trojans 26-0 in the Inaugural flag football game on Friday, September,13th at St. Anthony field.
Seniors Cooper Waite and Carl Molinaro combined for three out of the four touchdowns the Spartans scored against St. Anthony. Waite, an established basketball player for Coach Prather’s squad, took the gridiron for the first time in his high school career and had the game of his life in the victory. Waite admitted postgame that he felt scared playing in years past. “Not gonna lie, man, I was a little scared of getting hit,” Waite chucked, “but after being out here, I’m regretting it.”

He finished the game with two long touchdown catches thrown by senior Quarterback, and captain Blayde Omura. Along with the two Touchdowns, Waite caught a handful of other snatches amounting to well over a hundred yards receiving.

Omura, pleased with the outcome, felt confident facing the Trojans defense. “(St. Anthony) were giving us open pockets, and places to throw the ball,” Omura acknowledged in a post-game interview, “so I had to go throw it up and let my receiver make a play. I’ve developed a good rapport with Waite during practice, so I threw it into double coverage and trusted that he’d make a play.”  Omura trusted him all right. His two long touchdown throws to set the pace in the first half, leading to a 12-0 half tIme lead for the Spartans.

Opening the second half, both teams struggled to gain momentum, as they traded fruitless drives.  Yards were gained, but both offenses were contained by the defensive units, most notably junior Steve Savou leading the Spartans in tackles. St. Anthony, struggling to find a rhythm, went through two quarterbacks, as neither were able to produce consistent yards. Seabury cornerbacks, seniors Keala Frost-Lopez and Caden Granum, and junior Max Mccuin played an excellent game. They only surrendered one long pass the entire game, and Granum caught an Interception.

Midway through the fourth quarter, St. Anthony developed a decent drive in the footsteps of the end zone. On a critical third down, the Trojans quarterback dropped back to pass and was picked off by Savou, which clinched the game for the Spartans.

A few plays later, Omura united with Molinaro on a long TD pass that made the score 20-0 and iced the game.  Molinaro, the leading catcher for the Spartans, churned yardage with every pass that came his way and provided the spark the Spartans desperately needed in the Second half.

In the Waning minutes, junior Max Mckuin picked off the Trojans Quarterback, walking with ease into the end zone, making the final score 26-0, a resounding victory for the Spartans.

Cooper Waite: Waite caught two long touchdown passes from Omura, shredding the defense in the process, which kicked off a prosperous first half for the Spartans offense. Waite wowed the crowd, which could hardly contain their excitement after his second touchdown grab. A very Successful Gridiron Debut!
Carl Molinaro: The New Jersey native wreaked havoc in the Trojans secondary catching the clinching touchdown, along with catches totaling nearly one hundred receiving yards. Molinaro, also in his first-ever High School football game, had quite the introduction. St. Anthony coaches will have nightmares with all the catches he seized on Friday the 13th.
Steve Savou: Coming off of two especially strong seasons for the Spartans tackle football team, Savou carried the same momentum today. Savou controlled the tempo of the defensive game, which left the St. Anthony offense very uncomfortable throughout the two-hour affair.

Special Shoutouts:
Blayde Omura, the hardest working player on the Spartans, led the offense to 20 points in his first-ever game playing Quarterback. He threw two pristine dimes resulting in big plays, which ended with touchdown drives. Could not have happened to a better guy. Congrats, Blayde.

Seniors Meikayla Dunhill, and Sophie Van Der Veer:  These trailblazers are credited as being the first two girls to appear in a Maui Interscholastic League Flag Football game. Both delivered a splendid performance in snapping the ball to Omura throughout the game. Dunhill almost caught the two-point conversion attempt which would have made the final score 27-0. Excellent debuts for Dunhill and Van Der Veer. Remember their names. Who knows what could be a trivia question in thirty years?