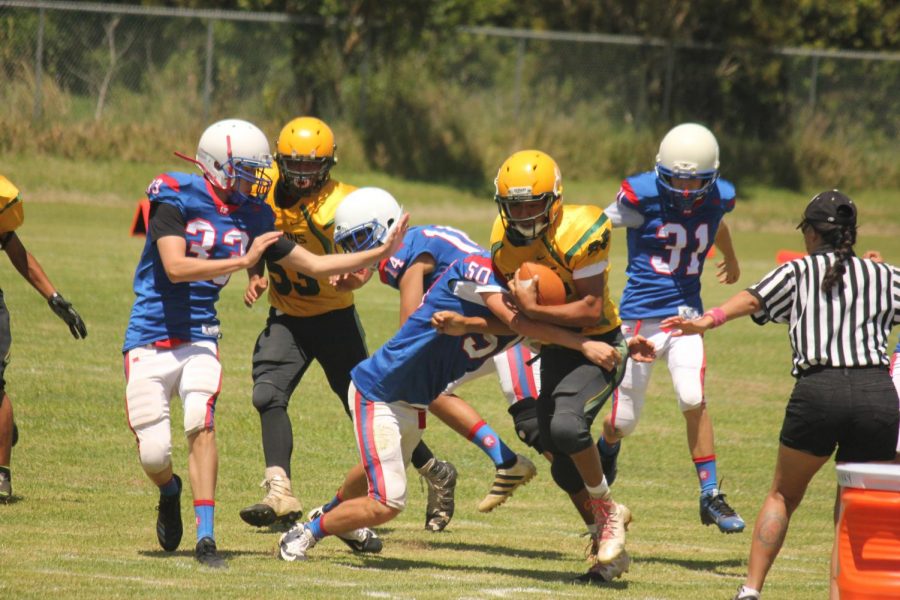 The Hana Dragons beat the Seabury Hall Spartans 26-20 on Saturday, Sept. 1, at Seabury. Hana scored a game-winning 66-yard touchdown with 1:30 left. Early in the game, Junior Kai Presault was ruled out in the first quarter with a thumb injury sustained before the event. He scored a touchdown, putting the Spartans up 8-0 in the first quarter, but the pain was too sharp. After one, Seabury was up 8-0, but Hana was on the attack.

Hana responded with a touchdown drive. A fumbled snap gave Hana a 12-8 lead before Seabury fans could realize what happened. Trailing 12-8 at the half, Seabury watched Hana outscore them by 12 in the second quarter. Hana then scored another touchdown, and the score was 20-6. Now the Spartans had to get themselves out of a hole.

Seabury fullback Ben Swartz punched in a short touchdown run. After both teams punted, Seabury recovered a fumble inside the Hana 10 yard line.

Sophomore Flavio Signoretti steamrolled for a touchdown, and the score was tied. Seabury was in a dilemma- they could either go for two or kick the extra point. They gave the ball to Swartz, but to no avail. Hana snuffed the run.

Junior kicker, Thomas Lee stated after the game that he had yet to kick a field goal with the current special teams group.

Hana had the ball at the 30-yard line with around 1:40 seconds left. Hana got nothing on first down and decided to dial up an outside run on the right side on the second down. Seabury, missing a few tackles, could not catch the Hana running back as he pranced to a 60-yard run, leaving everyone on the bench shaking their head.

Seabury got the ball and had 65 yards and 1:30 left in the game. Junior Parker Almeida came into the game as the quarterback. Seabury threw him out on the field with a minute and a half left and needed a touchdown to tie. Almedia, unfazed by the moment, calmly executed the two-minute drill and got the ball to the Hana 30 yard line.

“I just had to trust myself and stay calm through the pressure situations like I am on the mound in baseball. When running the quarterback trap, I needed to hit and drive for extra yards and protect the ball, and when running sweeps or counters, I just needed to get the ball into the hands of my teammates and let them do the rest.” Almeida said in a text after the game.

Almeida threw an incomplete on fourth down to ensure a win for Hana much to the joy of Hana fans in attendance, who made up 70 percent of the audience.

Max Flammer’s 3 stars:
1. Ben Swartz: Swartz, the heart and soul of the team had an excellent game compiling at least 15 tackles and a touchdown Swartz was in on almost every tackle.
2. Steve Savou: Playing defensive tackle, and quarterback, an exciting combo, Savou wreaked havoc. He threw the only touchdown for the Spartans to Kai Presualt and ran the ball exceptionally well.

3: Kai Jenkins: Jenkins has a ton of heart and passion for football, and it was great watching him play well. Most of the time,, he is the smallest guy on the field. It was no different Saturday, but he embraced the challenge. He attacked the ball carrier and made himself in the play. Jenkins had four tackles, and was on defense most of the game.