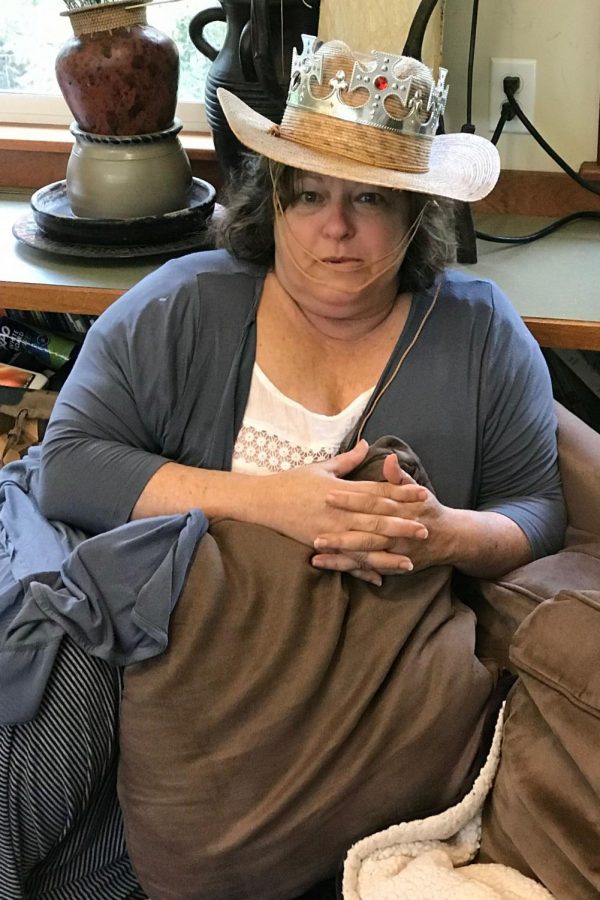 Experiencing a play directed by Sally Sefton is like riding a rollercoaster full of emotions. There will be times when the entire audience is smiling with joy, and other times when you can hear a pin drop. At the conclusion of all of her plays, the crowd goes wild and pleasantly roars, as they have just witnessed a quintessential Sefton play.

Sally Sefton, one of the longest-tenured teachers on Seabury Hall’s campus, has been at Seabury since the late 1980s.

She has directed many acclaimed plays, such as the tragedy “The Crucible” and the comedy “Lost in Yonkers.” Her talents are multidimensional, and she shares them on the stage, in her classroom, and with the Maui community.

After receiving her Bachelor of Arts at Florida State, she moved out west to pursue her Master of Arts at California State Fullerton, which where she found her love for theater.

Her college years served as a catalyst, as she turned her focus on becoming a high school theater director. “I completed my undergraduate in theater, and I was going to be an acting major, but then it was a big school with lots of acting students, and I did not receive a role in the cast that often. I then took a directing class, and I fell in love with it,” Sefton claimed.

She came to Seabury in 1988 and served as a speech teacher, along with helping with the theater, and she had no aspirations of becoming an English teacher.

“I came to Seabury not teaching English. I started teaching speech and acting, and then an English position opened up and my love for literature, my love for poetry, for Shakespeare, for talking with students about how they connect with different stories and novels became a driving force, and I went in to beg to teach English,” Sefton said.

Sefton became an English teacher and never looked back. In her English classes, she goes on a mythological journal with each student who comes into her class. Students eagerly consume daunting novels, such as the “Inferno” or “The Heart of Darkness.” Her students who bring questions to class discussions, as the journey has checkpoints. While Sefton’s book choices may seem rigid and challenging, but they are also fulfilling. Each complex text provides a scrambled message that the reader must decipher.

Sophomore Hannah Rosenthal fondly remembers the “Inferno”: “The Inferno is a great book that I believe was chosen by Mrs. Sefton because it allows the reader to make many textual connections and students to use their contextual reading skills to observe retribution for your actions. It also is a strong novel that shows us how our actions affect other people and the novel was an intriguing read.”

While she teaches challenging novels to her students, the same could be said to what she teaches her actors, along with the Maui community.

History teacher Kathy Middleton expressed her gratitude for Sefton in an email, “Ms. Sally Sefton brings her passion, intellect, compassion and deep moral convictions to every part of Seabury Hall. She is fearlessly honest and caring; she is also not accepting of people who violate human rights and decency.”

Middleton also added, “Ms. Sefton’s strong values, caring heart and moral fiber imprint her classes, her directing and all of her interactions. She is gifted and ethical on the highest level, and she captures the best of the human spirit in all of its aspects.”

Sefton claims that she has directed roughly 70 plays at Seabury, and the play that stands out the most is “The Diviners.”

“The play was set in the hills of Tennessee, and the people are poor but the community is strong, and there is a great sense of helping each other out and finding ways to connect… The play itself had an excellent cast and a beautiful set. The performance had a whole lot to say about community, and I was very proud,” Sefton described.

Her newest play, “These Shining Lives,” written by Melanie Marnich, is based on a group of women from Illinois who want to work, and there are not many jobs for women. Set during the years 1925-1935, the play follows the women as they get hired to work at a watch factory to paint the numbers on watch dials to slow in the dark. The coat is painted in radium, which can poison the women. They start to get sick, and the women try to fight the company who let them get exposed to the toxic chemical.

Sefton felt that now was the appropriate time to perform this play. “I chose the play now because the play has excellent roles for women, and we are fortunate that Seabury tends to have a lot of strong female performers. Secondary, workplace regulations for safety have been removed. We have gone backward in time to protect the workers, and this play is about trying to get safety workplace regulations. It is an important play regarding terms of where we are now in our history,” Sefton stated

She also added, “I would like the patrons to know that when people feel wronged by a big corporation or a monopoly that they have a voice and they can stand up to what they feel is wrong and that they can be victorious. All the women that are in this play are real characters, so the actors are finding out their story. This case was the first class-action lawsuit ever filed by women; they realize this case is in law books all over the country and it is inspiring for all the people in the play and me.”

The play will be performed at 7:00 pm on March 3rd and 4th at the A’ali’ikuhonua Creative Arts Center.

Sally Sefton brings perspective to her plays and in her English classes. She tends to perform empathetic, thought-provoking plays, and she assigns books of the same nature. She wants her students or patrons of her plays to be given another perspective and try to live life in someone else’s shoes.

“To me, the gift of the theater is that we get the chance to watch people move through life’s toughest challenges from a distance. We learn empathy and moral courage as we watch the characters work so hard to get approval from someone in the story we are telling. We learn the impact of coldness as we watch a corporation’s refusal to hear that their workplace practices were responsible for the deaths of so many. Then we reflect for a moment and wonder if we are doing the same with someone in our own lives,” Sefton remarked.

Magical theater makes one feel certain emotions. At any given moment the audience could feel sad with a gleam, and then at another moment, a jovial cheer can be from heard miles away. These examples are what make plays directed by Sally Sefton, the pinnacle of high school theater, so special and keep the audience wanting to go through the same experience again and again.