Coach Mana: A cook with heart and soul 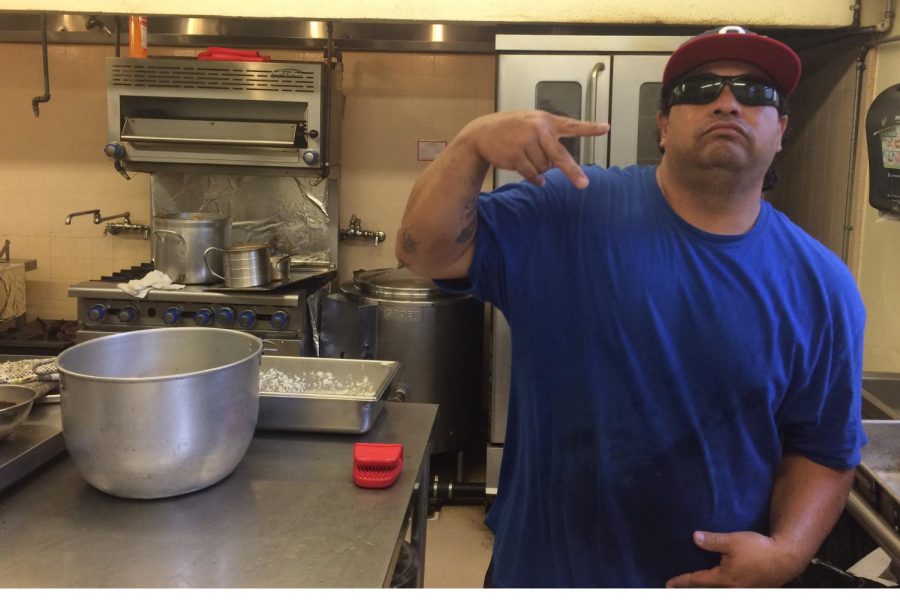 “He’s all about the kids. He understands, and he’s the most relatable of anyone here. He just understands us,” said senior Haena Balinbin who has had a close relationship with Coach Mana since playing football during his freshman year.

Charles Kaimana Cramer, more affectionately known as “Coach Mana”, is known on campus as one of the main cooks in the kitchen staff. However, there is more to the man than simply cooking food for us every day.

Coach Mana had a comfortable childhood growing up in Honopou, Maui, just a little before Twin Falls. His early life was good. He had good parents and was always working. He studied well in school, and sports kept him out of trouble.

In terms of schooling, Coach Mana began preschool at Wailuku Hongwanji, then moved on to Kahului Elementary School. “It was because my parents worked in Kahului, even though I lived in the country,” Mana shared.

Middle school was a transition point for Coach Mana as he made the decision to attend Kamehameha Schools Kapalama on the island of Oahu. “I wasn’t going to any private schools over here. I went to go look, seen them all, and had no intentions of going here. I wanted to go to Maui High with my friends, and when that wasn’t going to happen, I thought just to go someplace else. Plus, I was already at Kamehameha through seventh and eighth grade,” Mana stated.

Another thing motivating Coach Mana to go through Kamehameha’s high school program was football. To him, football was another way of keeping himself in check. Living on a different island came with distractions and things to take him away from his schooling. In his case, he moved from a relaxed life in deep Haiku to the city of Honolulu, where there was much more happening around him.

However, with his passion for football, came his drive to keep striving in school as well. “Without football, I probably wouldn’t have gotten the grades that I did. I needed the grades in order to play for school,” Mana expressed. This mentality is what led him to strive to play football in college.

After graduating from high school in 1997, Mana decided to seek higher education at Oregon State University where he came home for three weeks and then headed to football camp. He studied and played football there until 2000.

After college, he decided to come back to Maui to take care of his mother who was about to get medical treatment. “I had a choice either to stay and complete my schooling, or, come back and help my mom. Of course, I came back home because it’s my mom,” Mana emphasized.

He also then started working at the dialysis center in Kahului. Although it was a good job, it was mentally taxing dealing with the patients and complications. He then found a short term job working as security at University of Hawaii Maui College until the position opened at Seabury Hall.

Mana found success in finding the job at Seabury after meeting Gus Neckelmann, Seabury’s director of food services. “About five years ago, we became friends. He applied for a job and was hired. Then I told him about the football and baseball and things like that and that he would fit in here with it,” Neckelmann explained.

“We started talking story, and he ended up asking if I wanted to work over here,” Mana said. At first, he was hesitant about taking a job at a high school; however, Mana ended up agreeing to take the opportunity and be in the position he is in today. He has been working at Seabury Hall for the past six years.

“He cares. To me he cares about you guys and what’s going on. A lot of people don’t care about anything,” Neckelmann shared.

Mana sees himself having a positive influence on the Seabury students who he cares much about. “My kids are everything. I’ll do anything for my kids. I don’t know, I have love for everybody,” Mana exclaimed.

Mana believes that the students are the number one part of his job. He believes that it is partially what drives him to get going in the mornings. “What kind of person can actually say that they’re happy to work in the morning, waking up crazy early, excited to go to work?” Mana asked. He comes to school to cook breakfast every morning.

Mana feels that this year’s graduating class of 2018 is the biggest class yet that he has personally gotten to know. The years previous to this year had classes of four or six students with whom he personally knew. This year its around fifteen or twenty students.

He gives his highest appreciation to his girls and boys, especially to the “Dirty Dozen and PB, all them boys.”

His advice for the Seabury community is: “If you believe in it, and you wear it, then do it to the fullest. Give 110% in whatever you do because in the end, it’s only gonna help you out and benefit yourself. Do everything to the best of your ability. No need save nothing; saving is for the whales.”