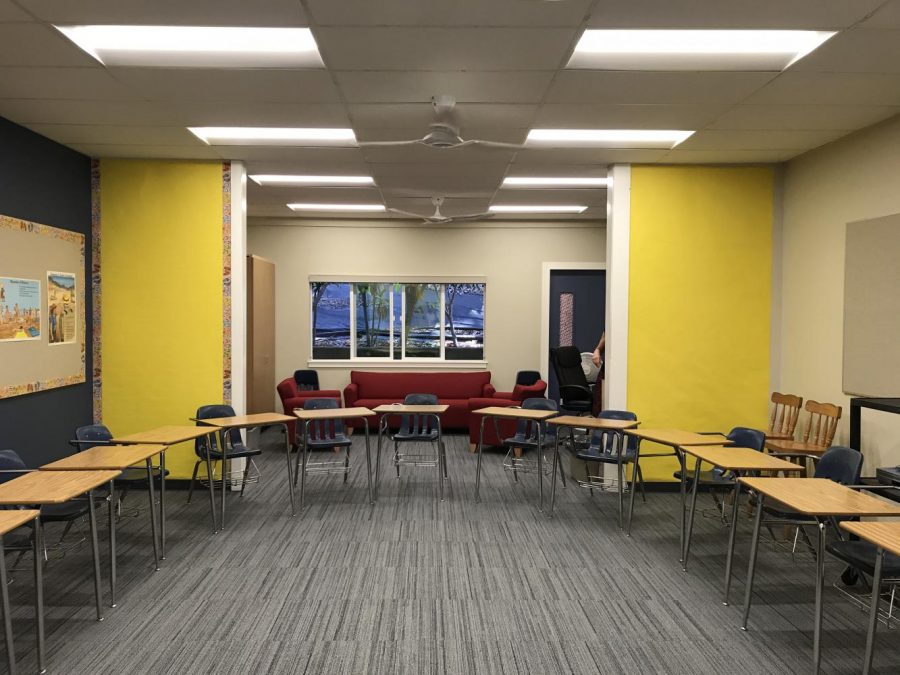 Over the summer, big improvements were made to the Seabury Hall’s Middle School classrooms. Walls and floors were ripped out, new lighting and windows were installed, insulation was added into walls as sound barriers, doorknobs were replaced with ones that could lock from the inside, and exterior hallway walls were painted.

In addition to these repairs, the school also installed special light switches, thermostats, and fans. Even bright new furniture alternates color in every room.

Changes began the day after students were released for the three-month summer vacation. The entire process took the entire break and finished just in time for the new school year.

Mrs. Jacqueline Neal, head of Seabury Hall’s middle school, wrote in an email, “While the condition of the classrooms was not terrible, they were showing their age. Temperature control and lighting were two of the biggest item that were addressed by insulating the roof, replacing old ceiling fans with the latest and greatest technology, soundproofing, and LED lighting. These modern improvements have been a game changer for teachers allowing for the comfort and technology that have been desired for some time. Their rooms now support the learning atmosphere that our awesome students need.”

Kaylee Volner, who is currently an eighth grader at Seabury Hall, said, “The middle school improvements have helped me learn better. The classrooms are really nice and cool.”

Neal also said in an email, “The middle school team and I are thrilled with the work that was done. Not only are the rooms literally cooler, but they are brighter in every way. The options with the LED lights, spotlight fans, and the really fun furniture and cabinetry has a state of the art feeling. Mahalo to Heidi Bigelow (Facilities Board Head) who oversaw the whole project, Alika Romanchak (our amazing architect, Seabury Hall alumni, and parent of a current 6th grader), and Milly Boren (our fabulous designer). We are forever grateful.”

It is extremely important for students to be in an environment where they feel comfortable, especially if they are there eight hours a day, five days a week.

Diana Oblinger is Chief Executor Officer of Educause, a nonprofit association with a cause to promote higher levels of education, and is also the author of multiple books such as “The Psychology of Learning.” In this book she wrote, “Attention is perhaps best represented not as a single process but as an organized set of procedures through which we select specific environmental stimuli or inputs for cognitive processing.” She also wrote, “learning appears to be affected adversely by inadequate light, extreme temperatures, and loud noises.”

Little by little, each improvement made in a student’s learning environment will set them up for success. By allowing these improvements to be made to the Seabury Hall’s middle school, teachers have set up a professional working environment for students, which will motivate them to prosper and create successful paths for themselves.