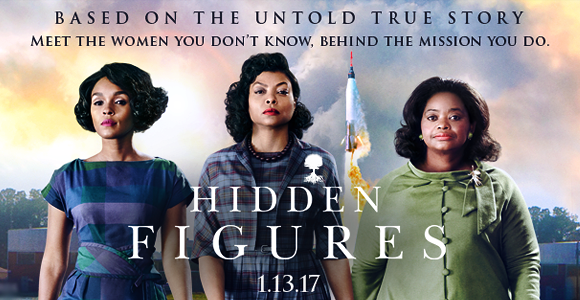 There are very few movies that completely empower and inspire an audience, but “Hidden Figures” is an exception to this custom. Recently, I had the privilege of watching this powerful film, and at the end, during the credits, it received a standing ovation from myself and the crowd. I believe that this is a necessary movie to get out and see because of the history, the recognition that Katherine G Johnson, Dorothy Vaughan, and Mary Jackson deserve, as well as the themes of restriction based on race and gender in a period of American history that did not happen as long ago as we may think.

“Hidden Figures,” directed by Theodore Melfi, is about three “computers” (women who do the research and calculations in place of technology), who work at NASA on the race for space. These “computers” are actually African American women: Katherine G. Johnson, Dorothy Vaughan, and Mary Jackson, played by Taraji P. Henson, Octavia Spencer, and Janelle Monáe respectively. This movie is based on the real, untold story of how these women played major behind-the-scenes roles in launching astronaut John Glenn into orbit, as well as further advancements for many more generations.

Katherine G. Johnson was the brains behind the segregated computer division in Virginia, before being promoted temporarily to the Space Task Group, a collection of all-white men working on sending America’s first astronaut into space. Johnson’s calculations were successful and advanced, but they all went under the name of a jealous coworker Paul Stafford (Jim Parsons). In the film, Taraji Henson expresses her frustration in experiencing segregation in many ways in the new office, including having to sprint to the colored bathrooms in a faraway building, and having her own separate coffee pot.

Several people such as the astronaut John Glenn (Glen Powell) and Space Task Group leader Al Harrison (Kevin Costner) are crucial in the success of Katherine Johnson. Their belief in her and support despite racial barriers make it possible for her to do what no other colored woman had ever done before. As the movie progresses, the influence of these two men over the the views of those around them grow, and Katherine becomes more integrated into the NASA community.

Dorothy Vaughan was in charge of all of the colored women “computers,” and despite completing her work correctly and on time, she still did not have the title she desired. In the film, she finds it unfair to do all the work of a supervisor but to not be called one. Still, she does not complain and instead worked on the IBM, a computer that could put her and others out of a job, in secret to be helpful. Vaughan turns out to have a knack for programming the machine and teaches her coworkers how to man the IBM as well.

Mary Jackson is the more outgoing of the three, and she was the woman who wanted to be an engineer. The only way she could apply for an engineering position in NASA was by taking classes at a local whites only high school. Jackson brought her case to the court, where it eventually passed, despite disbelief from her own husband.

The actors involved are convincing in their roles and portray their real counterparts with the passion, honesty, and wonder that they deserve. The story behind “Hidden Figures” was not common knowledge until lately, and the cast does justice to the previously untold story of these incredible women.

Throughout the film, there is additional footage of President John F. Kennedy, and clips of the real first rocket attempts. Even though black and white, these add to the historical setting and remind the viewers that this really did happen, and recently. Also appropriate to the time period are the costumes, showing what women wore during the time, including Johnson’s longing to own pearls like the white women in NASA. The dresses are coupled with music and classic cars to bring the audience right into the 1960s.

The sets contain churches, homes, a library divided into racial sections, and NASA headquarters, revealing the difference between the facilities white men vs colored women get, as well as showing the original space capsule prototypes that the trio of women crossed multiple boundaries to make possible.

Recently in 2015, Katherine Johnson at the age of 97, received the Presidential Medal of Freedom. This is an award from President Obama that finally recognized her contributions to science. This is revealed during the credits, along with additional information about where the women are now, what they went on to do, and real photos of them.

My one criticism is not a critique for the directors, the actors, or the playwrights. It was merely my longing that the movie had been shown in the 1960s, when it took place. The film is powerful today and would have been an even larger controversy then, with the topics of racial discrimination and the belittling of women in American Society. “Hidden Figures” is not just a film for the present; it is a film to help us recognize our past.

“Hidden Figures” is a must see because of the powerful information it contains on both the lives of real, important, unrecognized women, and its larger look on society as a whole. The acting and sets are both wonderful, and we all owe it to Katherine G. Johnson, Dorothy Vaughan, and Mary Jackson, as well as all of the other underappreciated African American women of this time, to be educated on their contributions and realize how important they were for our discoveries in space.