Film Review: Maui’s fishhook will pull you into ‘Moana’ 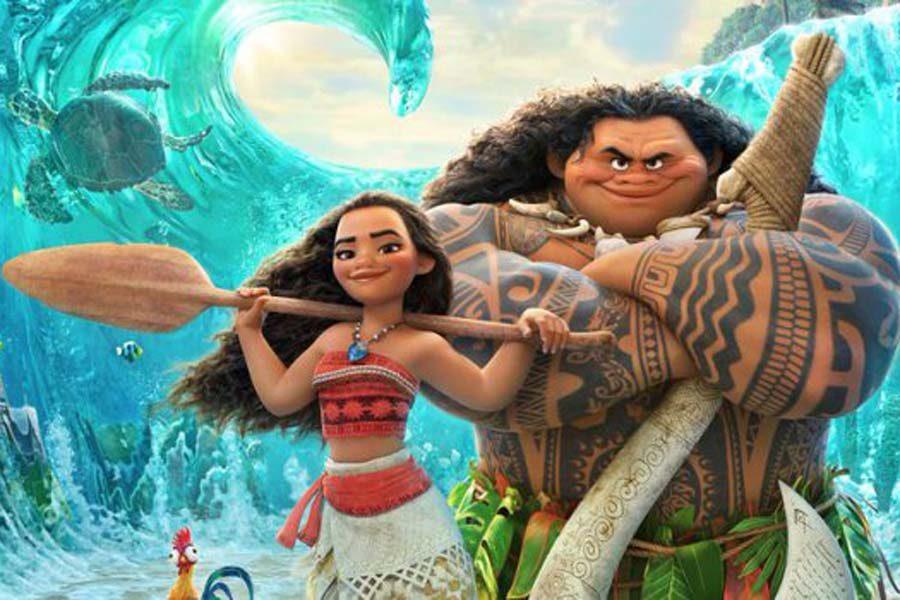 Each Disney movie always has something special about itself. For example, “Frozen” has incredibly catchy songs and shows the bond that many sisters share. “The Princess and the Frog” shows how women can be hard workers and how not everyone starts off at the top.

“Moana,” Disney’s latest film, does a great job of keeping the legacy of good Disney movies going, with its incredible plot and exotic characters. It, too, has its own special thing by incorporating wayfinding and Polynesian culture into the storyline.

The movie starts off with Moana (Auli’i Cravalho) as a little girl in love with the sea and fascinated by her grandmother’s crazy stories of a demigod stealing the heart of Tafiti and causing a dark power to slowly eat away all of the islands. Sadly, Moana is the daughter of the chief and is to be the next chief, which prevents her from following her dreams of sailing out to sea to find Maui and restore the heart of Tafiti.

Moana finds herself shipwrecked back on her island where her grandma takes her to a cave filled with old canoes to re-inspire her. She then bangs a drum inside the cave that shows a history of navigators and sailors that were her people. Moana tells her grandma of what she saw in the cave and her grandma gives Moana the heart of Tafiti, which she had all along.

When Moana goes to tell her dad she must go to save her island, her dad quickly shuts the idea down and moves on. Shortly after her visit with her dad, Moana finds her grandma lying on her deathbed suddenly very sick. Moana’s grandmother whispers into Moana’s ear that her dying wish is for Moana to leave the island and save the people. Moana sets of on a canoe with the heart of Tafiti to go find Maui (Dwayne Johnson), and from there the adventure begins.

Not too long after she leaves her island she is able to find Maui; however, she quickly realizes that her original hopes of him cooperating easily and coming with her were going to be harder to fulfill then she thought. Eventually, he cooperates with her and they leave to go find Maui’s powerful fishhook that allows him to shapeshift. As the journey goes on, Maui and Moana grow close and form a bond. Together, Moana and Maui go to restore the heart of Tafiti and defea

Each voice actor is very talented; their voices show the personalities of the various characters and bring the movie to life. Dwayne Johnson, who voices Maui, does an incredible job of making Maui seem like the buff and cocky man; he is but also was able to show Maui’s vulnerable side in certain scenes. Auli’i Cravalho, who plays Moana, has a powerful voice, which is great for the songs in the movie and for the acting, and she really gives Moana herself the cultural feel.

As I watched “Moana,” I felt as if it was a combination of Disney’s “Mulan” and Disney’s “Brave” but with a different plot in some aspects. “Moana” offers the same ancestor cultural feeling that Mulan did but also the same going against your parents wishes feel that Brave offered.

Although I loved “Mulan” and “Brave,” Moana blows both out of the water. “Mulan” was highly feminist and empowering, the music was well sang and I really enjoyed the characters. In comparison “Mulan” was not as culturally correct as “Moana” was, and “Brave” was also very feminist but didn’t captivate me as much as “Moana” did.

Although most of the movie was for the most part culturally correct, there were a few things I and many others were able to catch, such as how at one point they called what is usually called a “paddle” in tropical locations an “oar,” or when they called a “canoe” a “boat.”

“Moana’s” soundtrack was dramatic, inspiring, and fun. There were many catchy songs that you may find yourself singing after the movie as well, such as “How Far I’ll Go.” The song offered a great voice with a tune that doesn’t quite get stuck in your head but doesn’t leave your hear either, which makes the song not annoying but still good. The soundtrack adds a lot to the movie, including drama, information, and suspense.

The animation was unbelievable. It won’t be too long before you can’t even tell the difference between real people and animation in the movies. The visuals were unreal and really let me feel like I was part of the movie with the people. In the beginning of the movie Moana looks into the ocean and sees all these different creatures; the graphics for that scene were magnificent. The details of all the sea creatures are displayed so well that you feel like you can see them yourself.

“Moana,” overall, was an absolutely masterpiece, in fact one of my favorite Disney movies of all time. Everything about the movie was amazing from the animation to the voice acting to the songs, everything was perfect. The movie draws you in from the beginning and does a good job of keeping you intrigued. If I were you and have not already seen “Moana,” I would leave your house immediately to see the movie. The movie is a family movie, but I recommend it for anyone.