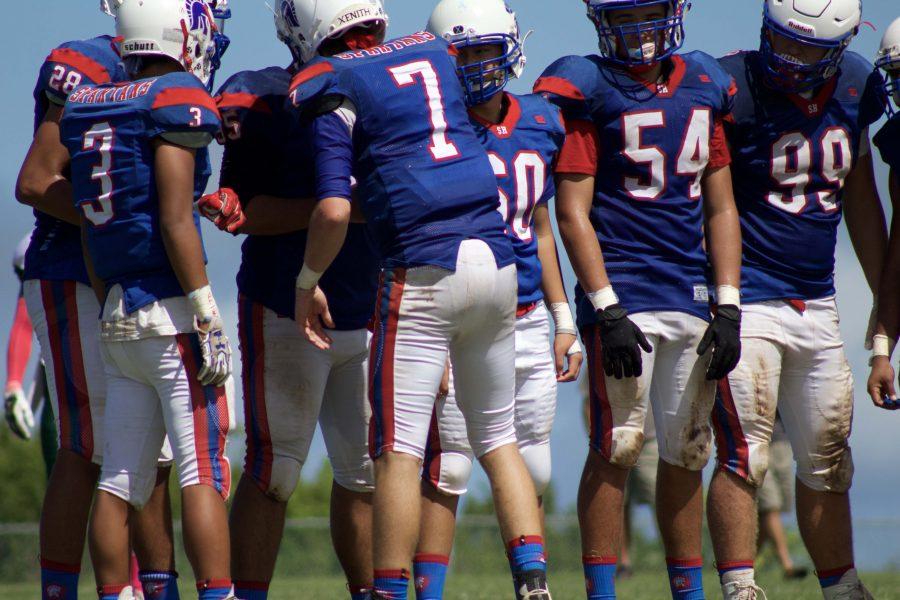 On October 8, the Seabury Spartans faced the Molokai Farmers for their first match-up of the season. Molokai won that game (26-43). The two teams will meet again on Thursday, October 27 for the MIL Division II championship game.

The Seabury Hall eight-man football team has been a driving force for Seabury Hall spirit with their electric energy. The team has found success over the last five seasons by winning three MIL titles and coming in second last year. Now, in their second year with head coach Guy Batchelder, they are finding their groove even though their competition has been fierce.

This season, the team has a winning record of 3 to 1. They won their season-opener against Hana on October 1 at War Memorial Stadium, delivering a crushing score of 43-16 to defeat the Dragons. Next, they played the Molokai Farmers on October 8 and suffered a devastating loss of 26-43. In their last regular season game, the team faced the Lanai Pine Lads, which they have a undefeated record against, on October 15.The Spartans emerged victorious with a winning score of 38-28.

Seabury Hall entered the playoffs on October 21 against Lanai, and they won with a score of 57-30. They are set to play the Molokai Farmers on October 27 at 6:00PM at War Memorial Stadium for the MIL Division II championship title.

The pressure on the fields is tough and challenging, but Rolando Berdal, a Seabury Hall junior who has played multiple offensive and defensive positions on the team for three years, faces the challenge head on: “I take every challenge and make the best of it because that is all you can do.”

Berdal is very passionate about football, as he strives to do his best every game. He strives to motivate the boys to play their best and be their best.

The football team faces the challenge of only having so many players at their disposal and having to play some player on defense and offense. Kili-Scott Madrid, a Seabury Hall sophomore and one of the offensive and defensive stars of the football team, said, “I feel the team has really improved this year and we have got a lot of new talent.”

Batchelder feels that they are strong and have a good group of boys who are dedicated and motivated. He said, “They are starting to believe in one and another. We talk a lot about being a family and being a fist and being together. I can see that start to come together. A lot of unselfishness.”

The team’s rivalry with the Molokai Farmers has been a fiery match throughout the seasons with Seabury taking the first blows and winning three years in a row undefeated. Last year the Farmers beat the Spartans in the championship game.

This year their rivalry started again with the Farmers taking the first punch, winning their first meeting onOctober 8 at Seabury. The two teams will meet again tonight, and the Spartans are hungry for a win.

Chase Graham, a junior and one of the team’s captains, said, “Molokai is a very difficult team, and they have size, which we do not have, but with hard work and lots of spirit I feel we can come out with the win.”