The Seabury Tides • May 18, 2016 • https://seaburytides.org/2399/student-life/seabury-halls-look-alikes-here-are-the-duos-who-have-you-seeing-double/

Seabury Hall’s look-alikes: Here are the duos who have you seeing double 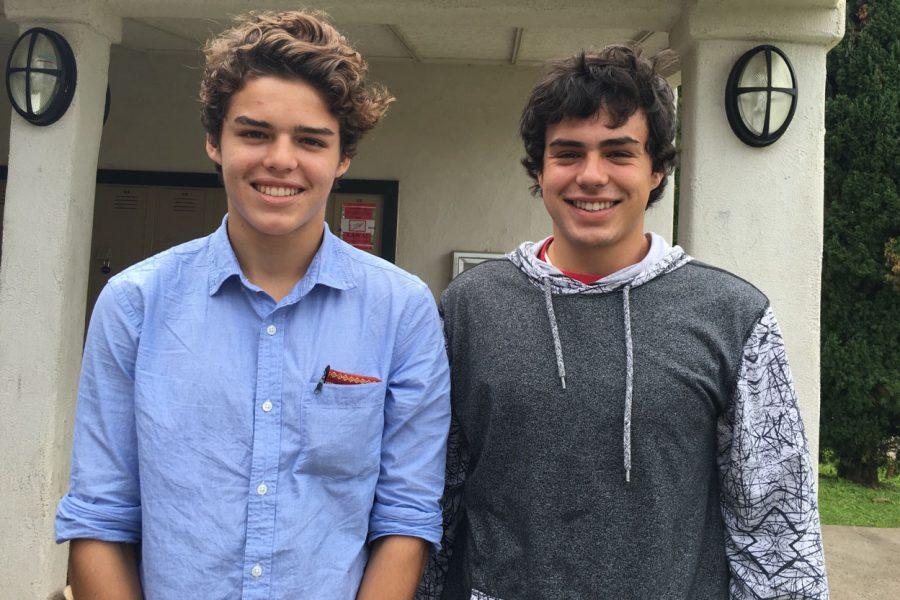 Even though freshman Mark Brocklehurst and senior Cody Wendt are not related, they are often mistaken for being brothers.

Have you ever caught yourself strolling through the hallways and doing a double take at somebody who looks exactly like your friend but with a second glance turns out to be someone else?

Although our community at Seabury Hall is made up of over 400 unique individuals, it appears to be quite common to find yourself calling out someone’s name across the room with complete confidence of who he or she is. But as you await his response, he turns around in complete confusion. It turns out the person wasn’t who you thought he was; it was simply your friend’s doppelganger, or look-alike.

Here’s a look at Seabury Hall’s most frequently confused duos.


What makes you look like your “twin” physically?
Kelsey: “Our hair and our size; we’re both tall.”

What makes you similar mentally?
Jost: “I’d say we have similar perspectives on a lot of things.”
Kelsey: “We both have older brothers. We both tease each other very easily. We both have a younger sibling perspective, and we both have ‘go get um’ attitudes.”

What sets you two apart physically and mentally?
Kelsey: “Physically, she’s got quite the bod.”
Jost: “Heather’s more mature, and physically skinnier. Together we’d be the perfect human.”

How often does someone ask if you are related?
Kelsey: “When we’re together near people. It’s often whenever we’re together.”
Jost: “We aren’t near each other all the time at school, but other than that, yes.”

Do you feel bothered by the fact that you look so similar, or is it a compliment?
Kelsey: “It’s fun.”
Jost: “It’s a compliment. I get it from my teachers a lot.”

Are there disadvantages of having a “twin”?
Kelsey: “Well, normally yes. Because people will think of the other specific person. In our case, it doesn’t happen often enough. If we were actually related, it would be harder.”
Jost: “I agree with that for sure.”

Has anyone ever confused the two of you?
Kelsey: “From behind, yes.”
Jost: “Yes, definitely.”


What makes you look like your “twin” physically?
Wendt: “Our lips, our eyebrows. We both have lighter skin but still a little bit darker.”
Brocklehurst: “Our hair, face, skin tone.”

What sets you two apart physically and mentally?
Wendt: “I might be a little fatter than him ’cause I eat a lot more.”
Brocklehurst: “I’m a few years younger than he is, so I’m probably not as physically developed.

How often does someone ask if you are related?
Wendt: “Very often.”
Brocklehurst: “Pretty often, maybe once a week.”

Are there disadvantages of having a “twin”?
Wendt: “No. There’s two people who look the same. You can be in two different places at once.”
Brocklehurst: “No, I don’t think so.”

Has anyone ever confused the two of you?
Wendt: “I don’t know, maybe. We have both been standing at some place, and somebody thought I was him, and was like ‘Hey Mark!,’ ‘Oh no, sorry, you’re Cody.’”
Brocklehurst: “People just usually ask me If i’m his brother.”


What makes you look like your “twin” physically?
Rothstein: “The brunette hair, green eyes, big eyes, but it’s mostly our facial expressions and how we carry ourselves that make us look like.”
Ringsby: “Brown hair, large green eyes, a few moles close to our mouths and the poses we make in photographs. Our attitudes and positive energy.”

What sets you two apart physically and mentally?
Rothstein: “Tati completely topples over me at a whopping 5’9”, so our height and body types are very different. Mentally, we have the same values and sense of humor, but we do often disagree on things openly.”
Ringsby: “We have different bone structures, and I do slightly tower over her. My skin is a bit lighter than hers. She has perfect light olive skin and tans easily, but I just get burnt. Mentally, we are very similar, the only main difference is that Kela is sometimes frightened by things like large waves, and I am not as easily frightened. Our minds are extremely alike. We argue every once in awhile, solely as siblings would.”

How often does someone ask if you are related?
Rothstein: “Pretty much once every week. Actually today someone asked if I was her sister.”
Ringsby: “Very often, especially on social media.”

Do you feel bothered by the fact that you look so similar, or is it a compliment?
Rothstein: “I would say it is definitely a compliment. Tatiana is absolutely stunning, and the fact that people say we look alike is an honor, in my opinion.”
Ringsby: “I am not bothered by it at all. Kela is gorgeous inside and out, so if I’m her ‘twin,’ I take that as the biggest compliment.”

Are there disadvantages of having a “twin”?
Rothstein: “It is really fun for everyone to think we are ‘twins.’ It is someone who I can always rely on to be a sibling when I need them to be, but we don’t have to live together every single day, the best of both worlds.”
Ringsby: “I 100% agree with Kela.”

Has anyone ever confused the two of you?
Rothstein: “In pictures, sometimes we are confused for each other, but in real life, we don’t look as much alike.”
Ringsby: “Not really. Maybe once or twice. In photographs, we resemble each other; however, we look very different in person.”