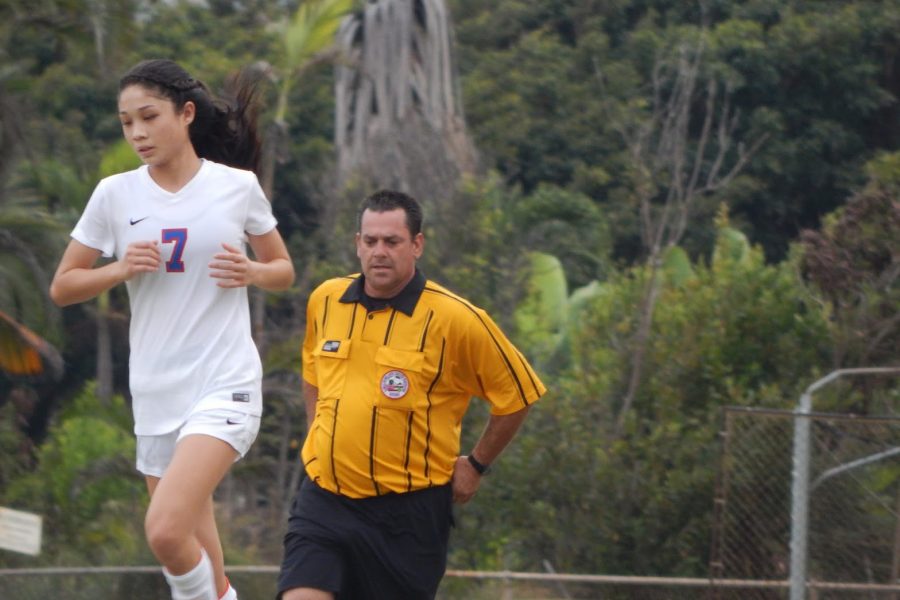 Freshman Kyra Cambra showed her talents on the soccer pitch and the basketball court by double sporting and playing on the varsity teams this winter.

Whether shooting some hoops or scoring some goals, Kyra Cambra displays her athleticism during the winter season sports.

Cambra is a freshman who decided to double sport this year due to her experience on both the soccer pitch and the basketball court. Since she has had great success with both sports, Cambra has been an outstanding player on the court, making the Division II basketball All-Star team in the Maui Interscholastic League (MIL) this March. When she learned the good news, she did not know how to react: “I was surprised because I didn’t know that I was going to make it, but now my expectations for next year [are] a lot higher,” stated Cambra.

Cambra started soccer at the age of three, and she has progressed to be an outstanding soccer player as well. Cambra puts in hard work year around in the off season with Maui United Soccer Club (MUSC), and she has been able to strengthen and grow as a soccer player. “I went to Albion this summer and we won first place for soccer,” said Cambra. Albion is a very well known tournament that is held every year in San Diego, California.

She has moved those skills from club to the high school pitch by playing for our girls soccer team. “[She] reads the the game well when she plays in the defensive position because she sees more of the field,” said coach Dave Mena, Seabury Hall’s girls’ soccer coach. Cambra and the rest of the girls soccer team has had a great season by winning themselves a spot at states, as well as nearly beating the Division I teams, only losing by one or two goals.

Basketball has always been around Cambra from when she was younger because of her two older sisters playing. Cambra started playing competitive basketball when she was in sixth grade; since then she has been double sporting. She plays with a very good basketball club, Kahului Sparks, where Cambra continuously works at becoming a strong basketball player.

“Kyra is an incredibly smart player. She can read a defense and see how a play will work out all as she is crossing half court. Her ability to see the hole in the defense makes her an incredible threat on offense and she has an amazing shot,” said Coach Samantha Craig, one of Seabury Hall’s girls basketball coaches.

“Kyra is a great all around player, she really knows how to work well as a teammate, and especially double sporting. She commits to both teams equally and she always gives her all on both sports,” said soccer and basketball teammate Makena Dougherty. Dougherty played for the girls soccer team, and she helped out the girls basketball team half way through their season by double sporting with Cambra.

Cambra’s suggestion for double sporting is: “ It’s fun and you get to do two things and it’s hard to choose one. So you get the best of both worlds.”

Cambra’s schedule is very full, practicing every day and going between both soccer and basketball, with barely any free time. Double sporting is very time consuming, but Cambra makes it work by managing her time wisely during her study halls and free blocks.

So if you happen to walk inside the gym this winter season, then go outside to the field, you may see the same person. Do not worry; you are not seeing double. It is just Cambra putting in hard work with the girls Spartans basketball and soccer team.