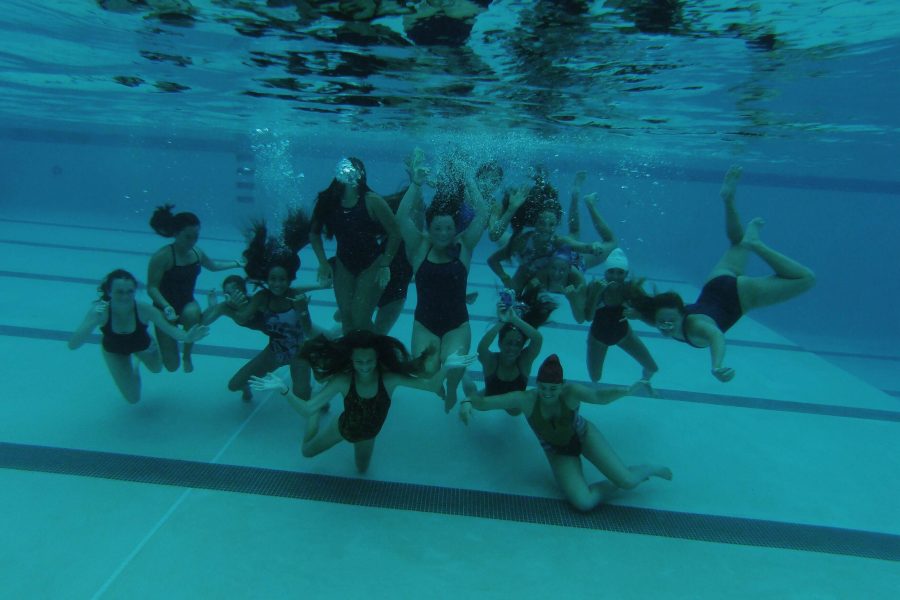 Seabury Hall's girls water polo has been building from strength to strength over the last three seasons.

If you ever find yourself at Farmacy Health Bar in Pukalani after school, glance down at the Upcountry Pool where you are likely to find Seabury Hall’s girls water polo team swimming laps, treading water, and laughing until they cramp.

Only three seasons old, the Spartans water polo team has made a splash that no one predicted, beating rivals Kamehameha Schools Maui in two games and King Kekaulike in one so far this season. The Spartans have one more regular season game, which will be held on Tuesday, April 19. [Full disclosure: I am a freshman on the water polo team this year.]

Scout Weymouth, a Seabury Hall senior and the team captain, loves how she is able to let go of her stress when she plays: “My favorite thing about water polo is getting in the pool after a long day of school and getting a chance to forget about everything except water polo.”

While relieving stress is a large part of why Weymouth plays water polo, her interactions with head coach Ryan Walsh have really made the season for her. “I think the biggest reason why I love water polo so much and feel so committed to the team is because of Mr. Walsh. He is a such great coach. He is super enthusiastic about the sport and makes practice really fun for the team,” Weymouth said.

Walsh has been coaching the team since its inception in 2014. If you ask any girl on the team, including myself, you will get rave reviews about not only his coaching but also his lively energy and relentless humor.

Walsh felt inspired to coach the team because he wished to give other girls the same life-changing he had during his water polo career. “I played it it in high school and community college, and I don’t think I was ever in better shape than when I was playing, and I had a lot of fun. It defined my high school life between friends, staying in shape, and staying out of trouble, and I wanted to be able to provide the same experience for someone else,” Walsh explained.

But Walsh is not the only reason the Spartans have been doing so well both this year and in past seasons. This astounding group of girls has become more of a family than a team, supporting each other no matter the circumstance.

Rachel Gilbert, a freshman at Seabury Hall and a first year water polo player, has experienced a warm welcome into the team this season. “I love our team because they are inspiring and see the world in a different light in terms of sportsmanship and they are really inviting,” she said.

This season, the team has made quite an impression in the Maui Interscholastic League (MIL), beating Kamehameha Schools Maui in both of their games. The Spartans most recent victory against the Warriors was on April 5. The two teams were tied eight to eight at the end of the game, pushing it into a nail-biting overtime. However, Seabury prevailed after junior Lily Pickering and sophomore Skylar Lickle scored in the last three minutes of the game.

This may not seem like a big deal to someone who does not know the history of the team, but beating Kamehameha Schools Maui has never happened in the history of Seabury water polo and rarely happens in Seabury Hall athletics in general.

A star player on the team, Lickle is a constant force of power in every game, scoring 12 out of the 13 goals in the first game against King Kekaulike. Lickle described the team this season as “very motivated.” If you ever find yourself at a game on Tuesdays or Saturdays at Kamehameha Schools Maui, you will likely see this motivation for yourself.

All the girls interviewed for this article and even Mr. Walsh all agreed that their favorite and most loved part of this sport is the aggressive nature of it. “I love how physically strenuous it is. It’s a really physical sport and the girls can get pretty aggressive, but it’s nice how everything gets left in the pool and everyone is really nice and positive once the games are over,” Weymouth explained.

The team gets better year after year, and with all the heart and soul the team puts in, there is no where to go but up, and as Weymouth said, “I think our team has great potential, and in the years to come, the lady Spartans will be the team that everyone wants to beat.”