DVD Review: From the stunning greenery of Ireland to the concrete jungle of New York, the challenges of love overseas in ‘Brooklyn’ 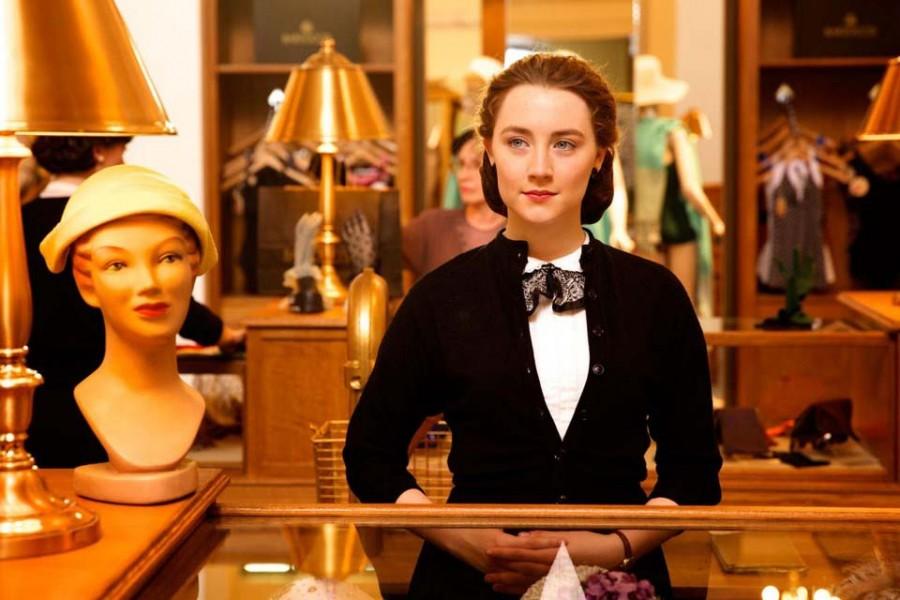 You may have noticed “Brooklyn” on the list of impressive Academy Award nominees for Best Picture this year. This lovely film will sweep you away to the era of the 1950s in this Oscar-worthy story. Based on Colm Tóibín’s novel published in 2009, the 2015 Irish film was directed by John Crowley.

Eilis Lacey (Saoirse Ronan) leaves behind her beloved country of Ireland to start a new life for herself in the United States. From the beginning, she suffers with unbearable homesickness as she embarks on a passenger ship to Brooklyn, New York. She is hopeful that she will feel at home right away because Brooklyn is full of other Irish immigrants, but this is not the case. Eilis is timid, emotional, and yearns to be back in Ireland with her sister, Rose (Fiona Glascott).

In Brooklyn, Eilis lives with unfamiliar, garrulous young girls in an Irish boarding house run by prudent Mrs. Kehoe (Julie Walters). She spends her days working in a department store, but fails to please her employer (Jessica Paré) because of her dreariness.

Father Flood (Jim Broadbent), an Irish priest who helped arrange Eilis’s life in Brooklyn, tries to reduce her homesickness by enrolling her in classes to become an accountant, her dream career.

Eilis begins to experience more light in her life when she meets Tony (Emory Cohen), a lively Italian plumber. Brooklyn begins to feel more and more like home to Eilis as her romance with Tony develops. He steals her heart and shows her a different side of Brooklyn, as he escorts her home from her bookkeeping classes at night, takes her to Coney Island, and brings her to dinner with his family. However, when it comes to declaring love, Eilis is more hesitant.

Their romance is put to the ultimate test when Eilis hears devastating news about her family in Ireland. Eilis seems to cope with the tragedy surprisingly well at first, until an emotional phone call with her mother inspires her to return to her home country.

Back in Ireland, a whole new world unfolds for Eilis. A place where she had previously left because of the lack of opportunity suddenly feels like the opposite. She works as a respected bookkeeper, reconnects with her best friend, and falls for Jim Farrell (Domhnall Gleeson), a handsome Irishman about to inherit his parent’s property.

The new romance and sudden possibilities in Ireland leave Eilis confused and conflicted. She stops opening letters from Tony, and considers staying away from him until an incident with her former employer reminds her of the conspiring nature of her small town.

Everything aspect of this historical period drama is stunning, from the scenery of Ireland to the costumes to the acting.

Besides the charming era of the 1950s, the performances by Ronan, Cohen, and Gleeson add to the authenticity of the movie. Ronan seems right at home and completely natural in her role as Eilis. She is able to handle a range of emotions, from pure joy one instance to complete heartbreak and desperation the next. Cohen also is sincere and convincing in his supporting role of Eilis’s suitor, as he portrays the fun spirited personality of Tony well. Gleeson, however, does not stand out as a star like Cohen, and is a little awkward in his role of Eilis’s other suitor.

The romance between Eilis and Jim detracts from the film’s main story, which is about a young woman finding herself away from her homeland. Eilis’s character is enjoyable throughout most of the film, but she becomes slightly less likable when she returns to Ireland and slips back into her life there, seeming to forget about her time in Brooklyn. The romance with Jim creates more conflict in the plot, which instead could have been done with more scenes of Eilis reminiscing about her past in Ireland. However, the film is based on a novel so perhaps the director was trying to stay true to it.

Overall, “Brooklyn” is a lovely film that explores homesickness, romance, and the concept of “home.” If you have not seen this film yet, I recommend picking up a copy of the DVD to watch over Spring Break when it is released on Tuesday, March 15.