Profe Francisco is a fresh face in the Seabury community 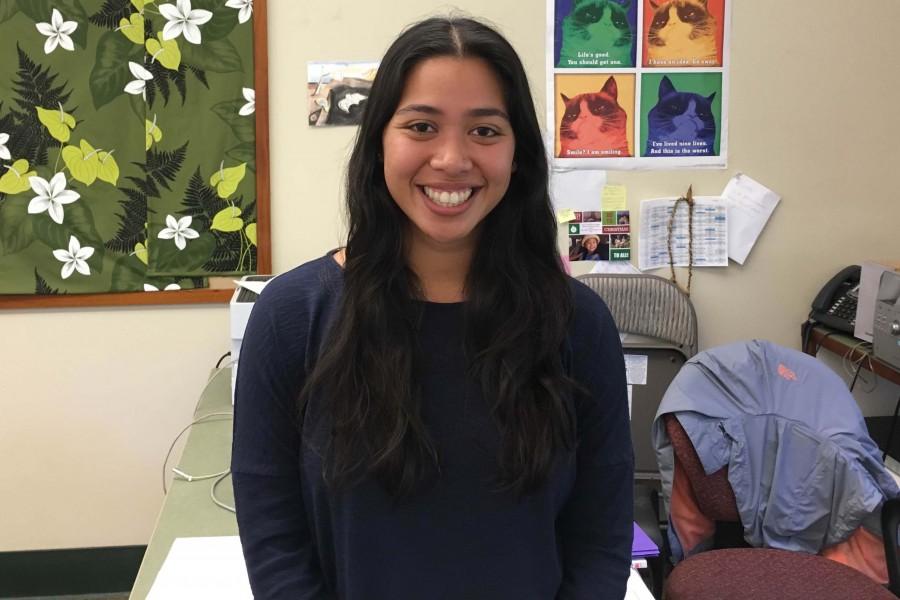 Asha Francisco is happy to share her passion for Spanish language and culture with her students during the third quarter.

From Makawao, Maui all the way to Madrid, Spain and many places in between, Asha Francisco is a well traveled individual. Seabury Hall is lucky to have her join the community for the third quarter of the 2015-2016 school year while Stephanie Metzler is on maternity leave.

Francisco was born and raised on Maui, spending her high school days in the halls of King Kekaulike, or King K, as many people know it.

Francisco was immersed with many cultures growing up, particularly speaking Portuguese with her family. “But only to my mom and her side of the family because they all live in Brazil and don’t speak any English. Whereas my dad’s side is Filipino, and even though they are in the Philippines, they all speak English. I think that is their second language,” she shared.

Being trilingual has given her an upper hand in her many endeavors throughout life. Her ability to communicate with people from many different places has made her traveling and home life much easier, especially when finding jobs around the world.

After high school, Francisco attended Oregon State University, from which she successfully graduated. She then went on to study at Universidad De Alcala in Madrid, Spain. Francisco fell in love with the area and could go on forever about her time there. “I really like Spain, and I know I talk about it a lot, but it’s because everywhere you go in Spain is divided by communities, and each one has a different history and a different culture even. Everyone is super nice and that is something I always look forward to,” said Francisco.

She loved the culture and people in Spain so much that she felt inspired to teach at a public high school for almost two years.

From October of 2013 to June of 2015, Francisco spent time teaching English to high school Spanish speakers in Madrid in hopes to get them into the university of their choice. “It was different as far as teaching techniques. I would say it was a lot more of here’s the information, memorize it, and then spit it out in these exercises. There wasn’t a variety of activities and projects, like how it is here in the States. I think it was a different way because it was so test oriented that I had to adapt to that style,” said Francisco, explaining her experience teaching a language in Spain.

Although she did love the years she spent working in Europe, Francisco feels that her time here in the United States, and specifically at Seabury Hall has been more meaningful. “The ultimate goal here it seems is that you want to speak, where as there, you needed to get a certain level of English to get into the university that you want or to get a job, so it was more about the test rather than learning for fun or for your interest,” Francisco said.

The Seabury Hall community has welcomed Francisco, just like a second family. “There are two things, the first is that the teachers have created a community and a team effort. It feels like I am part of a team, rather than in it by myself. If I ever need anything a lot of the teachers have been like oh we have this, this, and this and we have Spanish activities. I think in general, everyone is super helpful and I like that. I also like that I feel like I am more effective when I teach a smaller group because I can give one-on-one advice,” she shared.

Along with teaching Mrs. Metzler’s classes, Francisco will also be taking her spot in Winterim this year. Francisco will be chaperoning the Helping Hana trip where she will be picking invasive species and also visiting some fun nature spots, such as Venus Pools or Red Sand Beach.

Lona Girardin, a freshman in her Spanish Two Honors class, shared how she feels inspired by Francisco’s teaching this quarter, “She’s fun to learn from and she cares about all her kids individually. She goes out of her way to help any student understand a lesson and I love that about her style of teaching,” Girardin explained.

Although Francisco’s time on our campus is short, she is definitely making an impact in our community one student at a time.