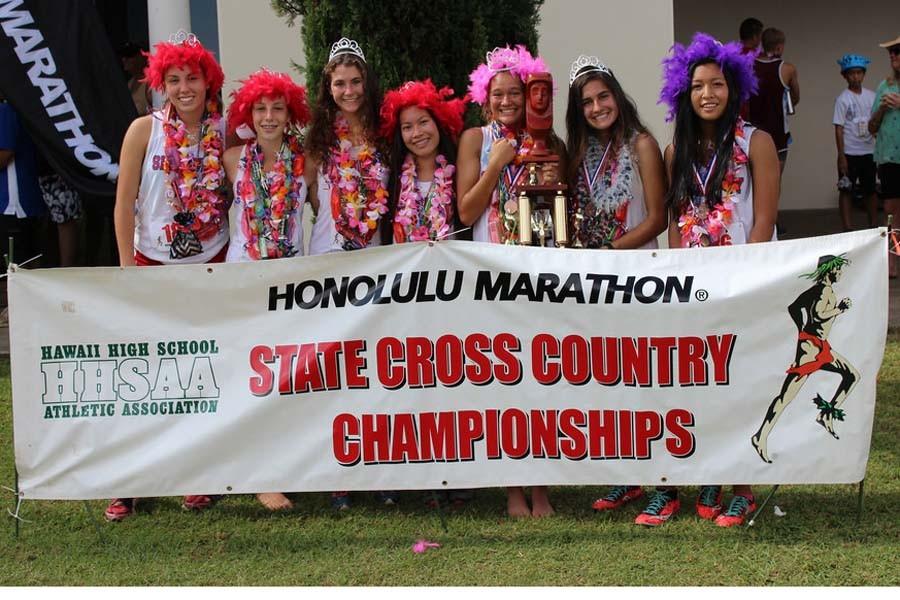 White tanks? Check. Red shorts? Check. Division II State Champions? Check, as expected. As the undefeated MIL champions for tenth season this fall and DII State champions for the fourth year, Seabury’s cross country girls were undefeatable, accepting only victory despite anything that came in their way.

After an exhausting day at school, the ideal end to the school day would be to go home and relax. For the dedicated team, however, relaxation only came at least four miles later, consisting of hills, distance runs, and other conditioning drills. The hardest part of the season was “pushing myself to go to practice on days I had lots of homework”, according to freshman Chloe Gangnath, who won JV Championships. Yet, the runners smiled through it all, the team knit together through jokes and encouragement, whether it was the first mile or the tenth.

With a small team consisting of only 12 girls, none of whom were seniors, they managed to win almost every MIL meet, and take at least five spots in the top ten varsity individual rankings. “We get to know each other better, and we’re more of a close knit group, and I think we’re going to win Division II [at states],” predicted sophomore Darby Mulligan prior to the team’s victory on October 31.

“It’s really nice just to be in this type of environment because everyone’s just been so caring, motivated, and hardworking and it’s been awesome to see everyone working together,” said team captain Ava Shipman, “I want to do good for them.” The rest of the teammates enjoy each others’ company as well, and unanimously favored Shipman as their main inspiration.

During the first few MIL meets, the girls placed a close second behind Maui High, but they worked hard and the Seabury Invitational marked a long awaited team victory, placing first ahead of Maui High in overall team. This meet also beat some of the runners’ personal goals, such as Ava Shipman who ran the 5k course under 19 minutes, and Veronica Winham who outran Maui High’s top two runners for the first time.

Although the team was temporarily at a disadvantage when junior Sara Mutzenberg suffered a serious ankle sprain, they were able to pull themselves together, securing first as a team two weeks later. Many of the newcomers on the team made tremendous improvements, for example, Maile Dougherty, who placed tenth at MIL’s regardless of being completely new to the sport just a few months before. Gangnath and sophomore Erika Preseault began placing in Mutzenberg’s place, beating Maui High.

This year, Seabury Hall hosted four successful races on the campus, more than any other school in the MIL league. Coach Bobby Grossman and Nytn Yashiro carefully planned out each course, measuring the mileage and setting it up each time. Starting with the successful Seabury Invitational, our school went on to host the third MIL meet, following with the MIL championships and later on the state championships, which was attended by over 200 people.

“I think our course [for states] is unique, because we have three laps, but on each of those laps, there’s a really long uphill and downhill, and our uphills are pretty hard here, so the fact that we’re able to train on it and practice those hills, on the third lap especially, where everyone usually tires out, we really get to show our advantage,” commented co-coach Yashiro before the race.
Some coaches and runners were skeptical at first of the narrow and winding course, but it worked well, and many appreciated the spectator friendly laps, describing the course as one of the fastest courses out of the entire season.

Shipman, Gangnath, and Winham impressively placed in the top 15 out of the entire state. The seven who ran the state course for the girl’s team all finished under 23 minutes, earning the team an overall score of 104, coming in second behind the Division I champions, Punahou.

“If they want to get in shape, and create another family, then this is the sport they should take, because it’s really fun, and the people here are awesome,” said Presault for prospective runners looking to try out cross country next year.

Injuries, new members, and challenging competition did not stop Grossman and his success with the victorious reputation of Seabury’s girls’ cross country team. “Last year, I don’t even know if I can name a highlight, this year there were so many highlights. We didn’t have much experience, and unexpected people became really good… This is probably the best team the school’s ever had,” remarked Grossman.