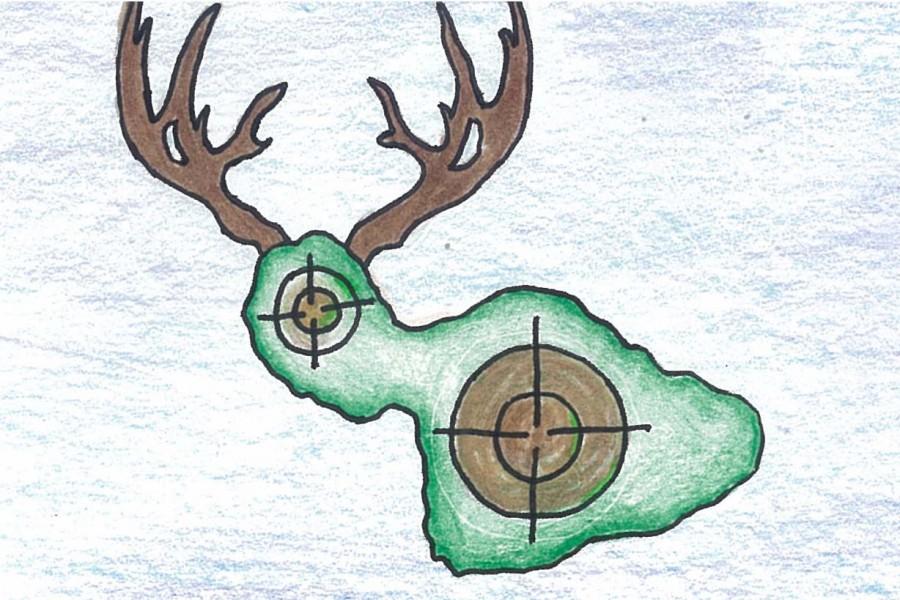 Deer, the seemingly adorable, harmless animals usually associated with the mainland. Yet, these creatures are not limited to just the mainland. In fact, our island, more specifically East Maui, hosts approximately eight to ten thousand axis deer, and the damage caused by the rampant herds is exceeding millions of dollars according to the county, which estimated the cost over the course of two years. Solutions for the depopulation of invasive species are never simple, but legalizing the sale of locally-hunted venison might be a good place to start.

Deer aren’t native, so how did they get here? How did their numbers grow so big? In the 1950s, deer started being brought over to Maui to provide hunting opportunities for veterans. Since they are unable to get here on their own (lacking the ability to swim or fly), it is assumed they were brought over frequently by people, and according to Yahoo News, their numbers have been growing 20 to 30 percent. Without any predators other than humans to keep the deer population in place, they are allowed to roam freely, causing devastating problems for ranchers and the fragile native ecosystem, which took millions of years without predators to evolve and is already being heavily threatened by wild boars.

Although organizations have been actively installing fences to prevent deer from destroying native conservation areas, the process is extremely costly, and energy intensive. Attempts to expand conservation partnerships into privately-owned properties in places such as Kula have been unsuccessful, since owners’ profits and “love for animals” undermine the environmental cost of invasive species.

Meanwhile the deer, often in herds, trample plants when they forage for food, which consists of bark, fruits, seeds, and flowers. Groups such as the Maui Axis Deer Harvesting Cooperative have been attempting various methods, such as sterilizing female deer and hiring organized groups of hunters, which has proved to be the most efficient. However, it is illegal for them to sell their hunted venison, only allowing the trade of deer among themselves and close acquaintances.

Legalizing the sale of locally-hunted venison meat would reduce the population in an efficient way, simultaneously increasing profits within the community and potentially reducing the market for industrial and imported meat, which has devastating impacts on the environment as well.

Naturally high in iron and leaner than beef, wild venison would also be free of antibiotics, steroids, and hormones, as well as other unnatural supplements in the commercial meat industry. The health benefits of deer meat would cater to the growing number of fitness enthusiasts, while supplying income to the hunting enthusiasts. Additionally, a number of people, including myself, someone who rarely indulges in any form of industrial livestock, genuinely enjoy the taste smoked venison hunted and cooked by neighbors and friends. It’s basically a win-win for everyone, except for the deer, of course.

Yes, I admit deer are adorable, majestic, and complex animals, but it’s better to swoon over their cuteness in a place where they do not destroy crucially endangered forests, precious ecosystems, and cause millions of dollars in damage. Even though there is no humane way to kill a living creature that does not want to die, carelessly letting the deer run amok, while they reproduce uncontrollably will eventually lead to larger problems that would require even more unethical solutions.