Explore the many facets of Tumblr 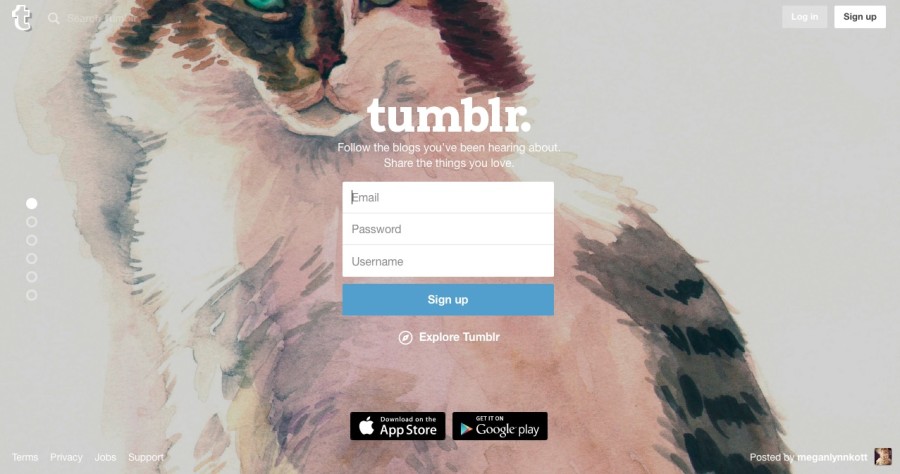 From fandoms to equality, Tumblr has blogs for a wide range of hobbies, interests, and issues.

Ah, so you’ve heard of Tumblr, the “blogging” website where people post and reblog images, videos, and text posts of things they like or find funny. Although it might look on the outside like a trendy website filled with mature and intelligent bloggers sharing their passions, on the inside there are actually countless layers with varying degrees of (in)sanity. From fandoms to equality, Tumblr has it all.

Hipster Side
The “Hipster Side” is probably what most newbies think of when they hear “Tumblr.” With pictures of Starbucks drinks and dipped-dyed hair, the hipsters are usually a group of kind people with pretty, tranquil blogs. When you check out their blog, you instantly feel calmed and relaxed from the flowers, song lyrics, jewelry, and GIFs of falling rain. If you need a respite from the crazy fandom bloggers, then hop onto any hipster blog and delve into their collection of pictures. They are some of the sanest people you will meet on Tumblr.

The Fandom Side
The fandom side of Tumblr is probably known as the most insane side. Here is where you will find all the fans obsessed with different things, such as “Harry Potter,” “Doctor Who,” and Panic! at the Disco. There are literally countless fandoms, but here at the main subtypes along with some of the largest, or most influential, fandoms within.

Books
Each book is a doorway to another universe. Book fandoms make up a huge percentage of all the fandoms, with the largest being “Harry Potter.” Nearly every book lover on Tumblr is in this fandom, and I would be surprised if you don’t see your favorite character from a different fandom put into a Hogwarts house at some point. You will see “Potterheads” hijacking posts and adding references to everything.

“Harry Potter” is not the only book fandom. Every book or series, from “The Hunger Games” to “The Lord of the Rings” has a fandom. One great thing about book fandoms is the fanfiction and fanart they create. These fans are wonderful artists and writers, and when you are not mindlessly browsing Tumblr I suggest looking up some of the work they have created.

Bands
The Bandom. Whether it is the holy emo trinity of Fall Out Boy, Panic! at the Disco, and My Chemical Romance, or more pop artists like Taylor Swift and One Direction, these Tumblrers take their music seriously. They can usually recite all the members’ names, along with their moms’ names, where they like to eat, and what they like to do. Some of them are even crazy enough to shun you if you don’t know every little fact! But don’t worry, the rest of them are welcoming and encourage you to listen to all their favorite songs.

TV Shows
Any of these Tumblrers would agree that Netflix is definitely a best friend. One of the scariest group of T.V. obsessed people are the Superwholock fans. Superwholock is a combination of the shows “Supernatural,” “Doctor Who,” and “Sherlock,” so it is not surprising that these members are a little insane. One thing you need to know about each of them: “Supernatural” fans have a GIF for everything. And I mean everything. No matter where you are on Tumblr, chances are that you will see a surprisingly relevant “Supernatural” GIF on some of the text posts. The “Supernatural” fans just can’t resist making everything about them.

The “Doctor Who” fandom is always known to the outside world as crazy and obsessed with a blue box, and well, they aren’t wrong. Luckily, they are usually nice, and most don’t care which doctor is your favorite. Just don’t skip Nine.

Now “Sherlock fans,” they are insane. With only nine episodes with years of hiatus in between, you will find them crying over old fanart and creating crazy theories to pass the time. Beware of the occasional weird GIF or picture.

But Superwholocks is not the only TV show out there. “Orange is the New Black,” “Merlin,” and countless others have their place on Tumblr. Just search through the hashtags to find your people.
Books, TV shows, and bands are not the only subgroups of fandoms. Movies, comics, and animes all are a part of the Tumblr community. But no matter what fandom you are in, there will always be the ships. A “ship” is a pairing between two characters. For example, Romonie, is a ship of Ron Weasley and Hermione Granger. All fans have ships they love and ships they hate. Someone’s OTP, which stands for “one true pairing,” is what they cry over and obsess about the most. If you want to survive, do not insult someone’s OTP. They will literally die defending their perfect couple.

Now that you know about fandoms, go ahead and join one! This is a great place to meet other people who are obsessed with the same thing as you. The best part is that they do not judge if you just spent the last eight hours watching Netflix, because chances are, they were too.

The Meme Side
This side of Tumblr is obnoxious with a strange sense of humor. A meme is like an internet joke. One of the most popular memes on Tumblr right now is Pepe, the sad green frog. He is literally everywhere. Some other examples of memes include “The Signs As ___,” where you get to know your personality based on your zodiac sign; LUSH bath bombs, where people throw ridiculous things in their bathtub with the caption “I love LUSH’s new ___ bath bomb!”; and grumpy cat, the picture of the disgruntled cat with various captions. Memes come and go, some die out and come back, and they get quite annoying after seeing a variation of the same meme over and over again. However, it would not be the internet without them.

The Aesthetic Side
This group of people are similar to hipsters in a way but slightly different. Aesthetic blogs do not necessarily have to have “hipster” posts like flowers and clothes, and just post what is “aesthetically pleasing” to them. There are two types of aesthetic blogs.

One is the serious group, whose blogs always have a certain color scheme, elegant pictures, and overall charm. Some of these people actually download themes from different websites to use for their blog. Everything looks pleasing to the eye, and they usually have good taste.

The other side, however, is completely insane. They post pictures of ridiculous things, like pizza
pockets in an antique gravy pot, and call it their aesthetic. They will go to the ends of the earth to do silly things like that. And when other people make fun of them and try to predict what they will do next, they go along with it and actually do it. I saw someone dip their iPod in a wineglass full of dish soap once because of that.

The Equality Side
This side of Tumblr supports Feminism, LGBT issues, and equality between races. These Tumblrers truly believe in equality for everyone, and it is nice to have people like them around. However, you will always find people arguing over the correct definition of equality, justice, and how to go about supporting everyone. And let me tell you, if insult one of these people, or disagree with them, they will explode and rant for hours. And they are right 99% of the time. These Tumblrers are a serious, if not a little insane, group of people who are passionate about equality, and I suggest that you do not mess with them.

Now that you know all about Tumblr, go ahead and join us! Although we are a bunch of weird, silly bloggers, the Tumblr community as a whole is very welcoming. We have something for everyone, so hop onto this crazy ride and join a fandom, post memes, and live like a hipster for the rest of eternity. Because once you join, you never truly leave.