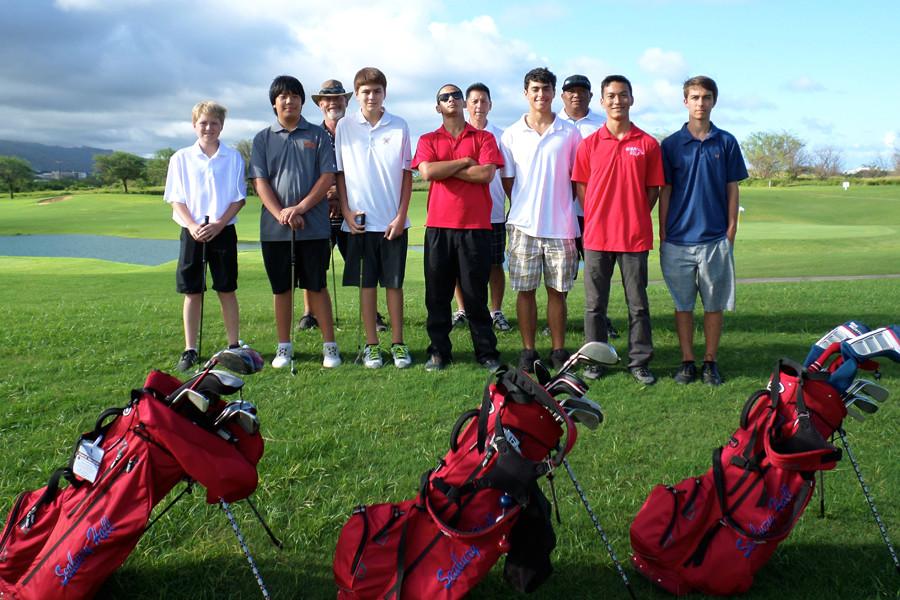 This year, Seabury Hall's golf team had ten players and two coaches, and they had a great year, with Ryan Chang and Kyle Sparks qualifying for states. The state tournament will be held on May 6-8 on the Big Island.

Golf balls flew through the air, clubs jingled in bags, and the sun shone down on the Dunes golf course where the Seabury Hall’s boys golf team practiced. With the golf season wrapping up, the boys were hard at work practicing for the last MIL competition by perfecting their chipping, putting, and swings, which was held Saturday, April 18.

This year, the team had ten players and two coaches, and they had a great year, with Ryan Chang and Kyle Sparks qualifying for states. The state tournament will be held on May 6-8 on the Big Island. The top 17 overall players island-wide get to go to states.

Ryan Kalani Abarra, one of the coaches for the team, was very happy about the season. Abarra has been coaching the team for about three years, along with Coach Brian Hue. Abarra said, “This is our first year in a few years that Seabury is having a winning season. I think they are doing terrific.”

Unlike most sports, golf is more of an individual sport. Although there is a team, you alone are hitting your ball into the hole, and you have your own score. Scores are based on how many strokes it takes for the ball to get into the hole, and the lower the number the better. Many elements are at play on the golf course, from wind to water to how the grass breaks. Abarra said, “You challenge the elements of the golf course, as well as yourself.”

Aron Graziano, a senior and the team captain, said, “In order to be good at it, you need a lot of focus and determination. It takes time to learn. You can’t just go out there and pick up golf clubs and hit a ball good. You have to practice and perfect your swing.” Aron has been playing on the team for four years, and has been golfing for six years overall. “It was this challenge that drew me in,” Aron continued.

Golf gives you many skills and life lessons. It helps with hand-eye coordination, because you need to look at the ball and hit it with the clubs, as well as focus on the different conditions and judge where you have to aim and how hard you have to hit it based on those your observations.

The games also instills the virtue of honesty in players. Aron said,“In the game of golf, you have to keep your own score. So you have to be honest. And by doing that it ingrains the essence of being honest throughout your entire life.”

“You have a chance to referee yourself. It is probably one of the only sports where you can do that,” said Coach Hue.

Golf takes time to master. It can take years to get good, and practicing always helps. During the course of this season, many of the players saw a great improvement in their game play. Daniel Graziano, a new freshman on the team and Aron’s younger brother, said, “I learned how to hit my clubs better than I used to hit them before. I also made it to the last round in the MILs, which is better than I expected.”

Aron, who is graduating this year, said, “I don’t really know what I am going to do in the future, but I know wherever I go, I will definitely be playing golf for my entire life.”

The future looks bright for the team. Although they will be losing four seniors, there are some talented middle schoolers coming up to join the team. There are also several freshmen currently on the team who will get better throughout the years. Hue said, “Half the team is young. They have a lot of potential.”

Golf is sport that requires maturity, and as the current players get older and more experienced the team will hopefully get even more successful.