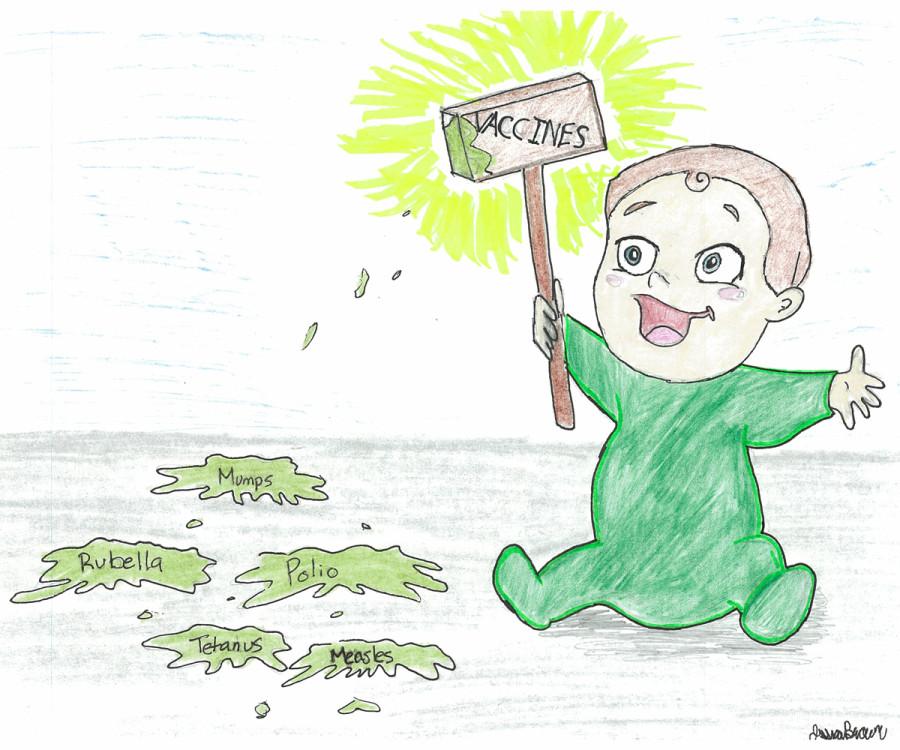 At the start of the New Year, Disneyland, otherwise known as “The Happiest Place on Earth,” made headline news for something that wasn’t very happy. In January, an outbreak of the measles occurred. Ever since the outbreak at one of the most popular theme parks in the world, cases of the disease have been popping up all around the United States, where it was almost completely eradicated before this epidemic. More and more cases are even starting to occur internationally.

According to a recent report on National Public Radio, approximately 9% of Americans are not vaccinated for the measles, which means that over 20 million people in the United States are susceptible to both contract and spread the disease. It is times like these when I am grateful that I am a member of the 91% that is vaccinated. I also am beginning to wonder why people would choose not to vaccinate their children.

One of the main reasons that people are skeptical about immunizations is because they are concerned about the possible consequences the vaccines may have. Common side effects of getting most vaccines include low grade fevers (100-101 degrees fahrenheit), headaches, very mild rashes, and soreness at the injection site. While more serious side effects are possible, the possibility of them happening is so small that it is disputed whether the problems were caused by the vaccine or simply by chance, according to the Centers for Disease Control.

Roald Dahl, a famous author who lost his seven-year-old daughter to measles before a vaccine was created introduce 1963, said “Parents who now refuse to have their children immunized are putting the lives of [their] children at risk.”

Think of it this way, would you rather your child have a mild headache and a sore arm for a day or two, or contract a debilitating and potentially fatal disease like polio, rubella, or the measles? I think most of us would pick the first option.

The point is simple: The benefits of vaccinations highly outweigh the possible drawbacks.
Another common question regarding this topic is “If everybody around me has a vaccination, I won’t get sick, so why should I have to get one?” This argument stems from a basic misunderstanding of a phenomenon called herd immunity.

When a high enough proportion of a population is immunized for a disease, it gives an individual who is not immune a certain amount of protection, referred to as Herd Immunity. Individuals who are protected by herd immunity include infants who are too young to get vaccinations, and people who have a severe allergic reactions to vaccines and therefore are unable to be immunized. However, this does not eliminate the possibility of getting a disease; it just lowers the odds of it happening.

Also, think about that argument for a second. If enough people had faith that they would be protected by herd immunity and chose not to get vaccinated, then herd immunity itself would disappear. Additionally, several diseases that are no longer an issue in the United States are epidemics in other countries, so an individual can potentially still be exposed to a disease even if everybody they know is vaccinated.

A common attitude that I notice in people against vaccinations is a distrust of medical doctors and other people in the medical profession. Yes, it is important to look into something for yourself before you introduce it to your body, but the assumption that all people in the medical field are just doing it to make money is just wrong.

Doctors spend at least six years of their lives and thousands of dollars learning about the advantages and disadvantages of medicine, and majority of doctors genuinely care about helping people more than their next paycheck. Furthermore, many doctors specializing in infectious diseases risk their lives to help people. It’s one thing to look into a vaccination and make a decision about your own life, but acting like you know more than a person with years of medical experience just from reading one article on the internet is simply arrogant.

I do acknowledge the fact that getting a vaccination or having your child get his or her shots is a choice that every parent has the right to make. However, this issue is something that affects not only the person facing the decision but also everyone else around them. I beg every parent facing this decision to do what is best for their children and protect them from something that could ruin or even end their lives.